In her early twenties, Steph Stern began going to yoga solely for the exercise. She ignored the mindfulness and meditation side of the practice, instead preferring to allow her mind to wander freely during class. But slowly, the idea of mindfulness crept in anyway. She tried several different workshops and books on mindfulness, but it was actually reading Search Inside Yourself that finally helped her start a daily mindfulness practice. Everything else had felt too formal or unrelatable, whereas SIYLI founder Chade-Meng Tan’s approach—starting with just 2 minutes and his “easy way” and “easier way”—offered an accessible entry, even for someone like Steph who loved to daydream. 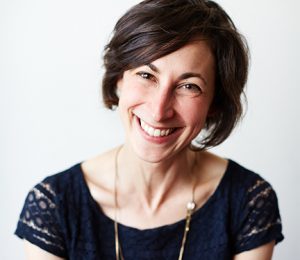 It’s no coincidence that Steph took the role as SIYLI’s engagement manager in August of 2015, about a year or two after that first reading of Search Inside Yourself. Over the last three years, she’s tailored a daily practice that’s revealed many rewards—from a keener awareness of her own mind to the unexpected ability to appreciate the joy of strangers. Her personalized practice incorporates stretching, apps, micropractices, gratitude, love and an important reminder that habits—even good ones—sometimes need to be broken.

My first experience was terrible. I went to a meditation workshop at a local yoga studio. The teacher had us focusing on only our exhale, which didn’t make any sense to my overactive brain. I couldn’t understand what my mind was supposed to do during the inhale. When I asked the teacher, she suggested that this practice might not be for me but didn’t suggest anything else. I was totally turned off, so I’m not sure what compelled me to keep pursuing it. On some level, I think I suspected that there were answers that would help quell a deeper existential angst and the feeling that my life was going by without really living it. I kept experimenting and reading about mindfulness and eventually stumbled on the SIY book.

How would you describe your practice?

I meditate in the mornings—almost every day, but I’m not a perfectionist about this anymore: I get up, brush my teeth, do a few minutes of stretching and then 10-20 minutes of meditation seated on a yoga block and using the Insight Timer app.

I also try to do some journaling everyday. Ideally, this would be 5 to 15 minutes of writing continuously without pausing. But I often just end up writing down an intention for the day and something I’m grateful for. I’m also working more and more on incorporating micropractices during my day, especially ones that get me in touch with my body because I spend most of the day in front of a computer. In addition to the micropractices taught in SIY, I use Wendy Palmer’s Leadership Embodiment app.

What are the greatest rewards?

What’s surprised me most and been the greatest reward has been a growing awareness of my own mind. This keeps coming in layers of new realizations, but so far I’ve been surprised to see how much time my mind spends in the future, either worrying or fantasizing and especially having imagined conversations. Seeing my mind more clearly has helped me soften my inner voice. Over time, a much kinder, gentler voice has developed and strengthened, and it’s much easier for me to express self-compassion. Instead of powering through something, or blaming myself, I try to ask myself what I need.

I’m also able to take pleasure in other people’s joy, including strangers, in a new way. For example, a loud group of teenagers having a good time on a full subway car used to annoy me. I’d want to read my book and would feel put out by their exuberance. Now I feel happy for them and take pleasure in their enjoyment. The most surprising part about this is that it’s been a natural shift in my attitude, almost like my practice spilling over, rather than a concerted effort I’ve made. Sometimes I do make a concerted effort, too! I’ll try to wish others well (in my head) on my bus ride to work, and this helps transform a crowded commute into a heartwarming moment.

Is there anything unusual about your practice?

At the end of my seated meditation practice, I whisper “I love you” to myself before I stand up and move on with my day. I started doing this after the end of a serious romantic relationship. I realized that one of the things I missed about the relationship was the feeling of loving someone and decided to turn some of that love toward myself. Tying it to my meditation practice is also a nice way of thanking myself for taking the time to practice.

What tips would you offer someone who wants to get started?

For me, it was vital to start small and build up. I know other people who have jumped right into a 10-day retreat—and kudos to them! But for people like me, I would suggest starting with whatever feels manageable. It might be 2 minutes or even just one micropractice. Trust that you can grow your practice over time and that it will have an impact that you can’t anticipate.

I also recommend taking a periodic break from any regular habits, even ones you love. Every so often, especially when my daily meditation practice starts to feel like something I’m just checking off a to-do list, I’ll stop doing it for a few days. I always miss it, and this helps me reconnect with the fact that my practices are for me and my own benefit. It helps me appreciate it again when it was feeling rote.

*This is the second blog in a series that shares the stories of SIYLI staff and their mindfulness practices. Read the first blog “Loving Kindness: Two Years and Going Strong.”